We’re ecstatic to announce Wyatt-MacKenzie’s acquisition of WE: AN ADOPTION AND A MEMOIR by Ben Barnz for a Fall 2018 release. 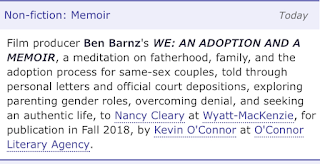 WE: AN ADOPTION AND A MEMOIR is universally relevant in its examination of family and belonging.

*
On September 8th my adopted daughter was born.
On September 11th two planes flew into the Twin Towers.
On September 12th my daughter’s biological father legally contested the adoption.
WE tells the story of the harrowing six-month litigation that followed my daughter’s birth, but it’s also a memoir.
WE is about growing up in the eighties during the height of AIDS, when to be gay felt like a death sentence, and when the concept of same-sex families didn’t exist. It is about auditioning for my future husband’s film in Los Angeles and eventually falling in love. It is about our commitment ceremony because marriage was not an option. It is about the day we met a terrified mid-Western girl who was seven months pregnant and carrying our daughter. It is about coming up against my own moral center and having to do what is right when what I wanted to do was wrong.
*

Every year, over two million children are adopted in the United States alone.

WE is one story about creating a family, and about how much has changed in thirty years. In the 1980s, gay fathers were invisible; in 2000, eight percent of same–sex couples were raising adopted children; in 2009 it was over twenty percent and “the trend line for same-sex couples in particular is absolutely straight up.” (Adam Pertman, E.D. Adoption Institute)