"Class Dismissed" - The Rise of Homeschooling

We recently signed SUDDENLY HOMESCHOOLING: A Quick-Start Guide to Legally Homeschool in 2 Weeks  (Summer 2011) and author Marie-Claire Moreau sent an exciting email about a new documentary "Class Dismissed: Education and the Rise of Homeschooling in America." They just released this trailer:

We'll have Advance Review Copies of SUDDENLY HOMESCHOOLING available in February. The book will be released by summer, when many parents may be faced with the reality that — due to school closures, bullying and/or school violence, or special disabilities or requirements of their children — they are suddenly homeschooling, and need to know the basic steps of how to get started.

My O.W.N. Behind the Scenes - Being on Oprah

As Anderson Cooper admitted last weekend, I'm lovin' O.W.N., Oprah's network. I confess, "Season 25" with the behind-the-scenes is awesome. I wish all authors would watch to see what goes into making a show, so they wouldn't feel so disappointed that their "Oprah dream" (and EVERY author has one) didn't come to fruition -- because it does not come easy.

And, truth be told (if the truth is to be told here), having had an author "on the Oprah show" revealed what this publisher never, ever could have imagined. The Contract. The one guests sign with Harpo that says they will not use their appearance in any marketing or product packaging. I get it. But it didn't really sink in until I realized the "Wyatt-MacKenzie Author on Oprah" press release I had been writing in my head for the last 12 years (after dozens and dozens and dozens of attempts) was not going to be sent out after all. Even adding a link on the media page made us nervous. We really wanted to stay in Harpo's good graces for a future appearance in the event, for example, my author finds Osama bin Laden. I'm not joking. She was the one who first warned about him in 1993 (see the declassified documents on her website). But since Oprah is lifting the curtain, I thought I could too.
* * * * * * * * * * * * * * * * * * * * * * * * * * * * * * * * *
How I got Gina on Oprah...
Gina Bennett's NATIONAL SECURITY MOM: HOW GOING SOFT CAN MAKE AMERICA STRONG (NOV 2008) was our 74th book selling mainstream. Peter Bergen (CNN national security expert) called it simply, "Brilliant." As profoundly important as Gina's book is, it still wasn't enough to get the attention of Oprah producers. So, shortly after I finished her website I pitched Gina, like I do all of my authors, for a query on Oprah.com's "upcoming shows." This one was: Do you know a "superwoman"?
Is there a "superwoman" in your life that you find amazing and inspiring? The Oprah Winfrey Show is looking for remarkable women who are doing it all. Tell us who are the "superwomen" in your life. Do you know someone with a successful career that still manages to raise a large family? Is there a superstar activist in your community who juggles it all? Do you have a prestigious or demanding job that you excel at? Or maybe you know someone who's survived something difficult or achieved the impossible. Please attach 2 photos for example, if you're a teacher and a mother of 6, please take a photo with your children in a classroom. If you're a pilot, snap a photo in the plane's cockpit. We want to see a superwoman in action! We may use your photo on an upcoming show. Please only send in photos you are willing to have published on-air.
My pitch on August 28:
Superwoman Gina Bennett weaves her day-to-day counterterrorism career for the CIA with her life as a mom of five—intertwining baseball games and President briefings, dance class and declassifications, peace among the teenagers with peace around the world.
If you are looking for a superstar activist, Gina was inspired to join the frontlines of the “war on terror” 20 years ago, and has written some of the most important intelligence of our time including the 1993 warning of Bin Laden! CNN’s terrorism analyst Peter Bergen calls her work “brilliant” and refers to it in his bestseller, THE OSAMA BIN LADEN I KNOW, as does most major media whenever the reports she has written are declassified (one as recently as 8/20/08, another in 2005 deemed “prescient” and “genius” by the New York Times).
I have never met a woman like Gina. Her philosophy that “going soft” will make America strong—just as President Clinton said at the DNC this week: “lead by the power of our example, not the example of our power”—and her compassionate, energetic, steadfast search for the truth, the threats, and the security of the future for our children, inspires me and is sure to engage others.
I attached 3 photos from this animation -- Gina in a Helicopter over Iraq, Gina on a camel in Giza, and one of her family on vacation.
Scratched in huge letters across my journal on September 9th: "OPRAH CALLED!" An assistant producer asked me to send more high resolution photos. They were interested in including Gina in a show that would feature Alicia Keys performing her new song "Superwoman." I could barely breathe. The war-torn publishing angel on my shoulder cautioned me, "it doesn't mean anything."
I was told there would be a meeting the following day. That afternoon the phone rang, it was Julie at Harpo. They needed pictures of Gina at work -- the CIA headquarters! -- by tomorrow. It was late in the day so I called Gina's husband on his cell phone. He was at a baseball game with the boys, Gina was at ballet with the girls. He couldn't believe when I told him what Harpo wanted. Everyone went into action. Gina broke through all colors of tape to get clearance from work, she passed Harpo's stringent background-check, she lined up the CIA's photographer, and the next day her husband got the 5 kids picked up from 3 different schools and brought everyone to the office. It was September 11, the highest level of security on this day than any other, and we were taking family photos on the CIA seal for Oprah's show. Unbelievable.
And here's that photo, on the big screen on Oprah's stage, behind Alicia Keys singing "Superwoman" on October 2, 2008... 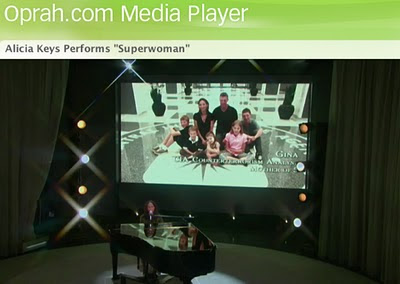 And... my OWN behind the scenes, here's an archived video from that day.

*WARNING: TURN VOLUME DOWN, my squeals can be deafening.* 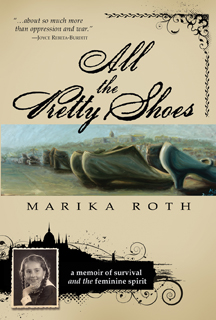 MEMOIR
All the Pretty Shoes
Marika Roth
40 black-and-white photographs
Wyatt-MacKenzie Publishing
Softcover $15.00 (254pp)
978-1-936214-27-3
There are many memoirs about World War II, each with its own story of atrocities, devastation, and triumph. Memoirs help make history real; names, dates, and events are important, but it's the personal suffering of the people involved that cause readers to feel the human pain woven into nearly every story.
Marika Roth knows about suffering. As a child, she was subjected to negligent relatives and abusive boarding schools while her mother spent time in a sanatorium, dying of tuberculosis. At twelve years old, she and her father were separated forever when the Nazis ordered men and boys to march from the housing in which they thought they were safe. A few days later, she was shot at, along with a crowd of other Jews; only by pretending to be dead did she escape the soldiers. A day later, hiding in the bushes at a park, she witnessed the murder of hundreds of Jews along the banks of the Danube River. Alone, starving, her hair infested with lice and feet protected from the snow and cold with only newspaper, Roth relied on her fierce spirit and keen resourcefulness to rise above her miserable existence and survive until the next heartache. For even as she found her way out of one horror, another waited for her on a different shore.
One of Roth's many strengths as a writer is her ability to tease the details of her experience to the surface to greater reflect the suffe ring at the core of her experiences. For example, a few days before her father is taken away by Nazis, Roth gets her first menstrual cramp: “Once back in our quarter, I discovered blood in my underwear which I learned was the reason for my pain...Although I was embarrassed to tell Father, I cuddled up to him, promising that I would love him forever.” In the next paragraph, she gets her last glimpse of her father as he is marched off with all the other males. Roth, formerly a fashion model and now an artist and writer, makes no attempt to hide her own fallibility as she reveals the cruelty of others. She does not come across as an innocent in her tale of trial and woe but fully admits to her own mistakes and acts of ignorance. Readers will be attracted to this inherently human character.
Though there are plenty of memoirs on the market, replete with new details of human suffering, there is always space for one that combines good writing with a compelling, applicable story. All the Pretty Shoes will help make the Hungarian experience of WWII a more familiar one, and inspire resilience in those who read about Roth's journey to well-being.
(January) Andi Diehn
Posted by Nancy Cleary at 10:17 AM

The Wyatt-MacKenzie crew wishes you well! 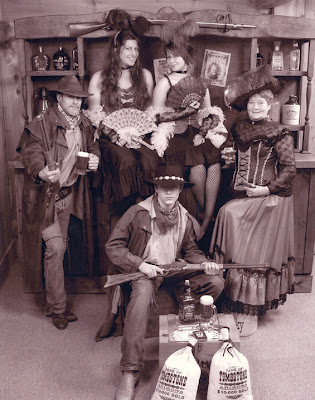 The staff at Wyatt-MacKenzie Publishing circa 1911.

We’ve had an amazing 2010 here in Deadwood! We want to wish all of our backlists, newbies, and future authors the true fulfillment of their book’s potential in 2011.