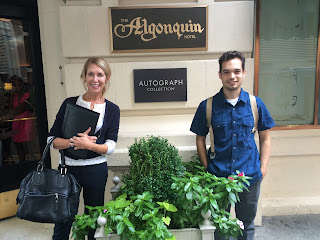 Wyatt-MacKenzie is ecstatic to announce the acquisition (and grant of rights!) for the charming picture book Matilda, The Algonquin Cat written by Boston columnist Leslie Martini, and being illustrated by Massimo Mongiardo (Young Jane Austen), for a Fall 2016 release. Author and illustrator are pictured above, meeting at the iconic hotel.

In 1902 the elegant Algonquin Hotel opened its doors in New York City and became the daily meeting place for talented young writers, editors, actors, and publicists. In 1932 a stray cat wandered into the lobby, and into history. The renowned actor John Barrymore named him "Hamlet" and since then the Algonquin has always had a resident cat. All the male cats are called Hamlet, and the females—for reasons unknown—are called Matilda.

This picture book is funny, and informative, and for everyone, ages 4 through 104, who love cats and the literary backstory. Check out Matilda's Facebook—she's more famous than many of our authors! Here's a peek at a sketch... 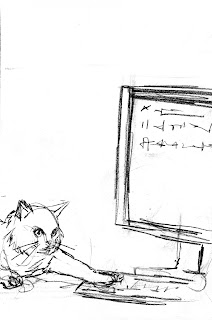 And in a serendipitous turn, The Algonquin Hotel lobby will display the artwork of Al Hirschfeld, which will also grace the pages of Wyatt-MacKenzie's 2017 acquisition...

Wyatt-MacKenzie just signed Create! A Captivating Collection of How the World’s Most Creative People Live—soul-searching interviews assembled by Goodwill Cultural Ambassador, actor and best-selling author Ronald Rand. Mr. Rand saw a copy of our 2016 release Witness to Spirit and knew his beautiful book would find a creative home with Wyatt-MacKenzie.

Create! explores the creative process of the world’s most acclaimed actors, actresses, artists, choreographers, composers, lyricists, dancers, directors, educators, musicians, playwrights, poets, singers and writers of generations. We're securing rights to include breathtaking artwork, including Al Hirschfeld and many others!