Proud to announce this fall acquisition and share a cover reveal... 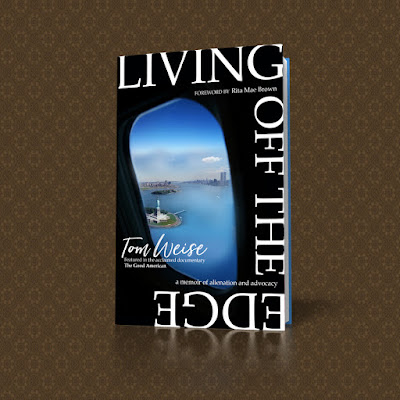 The heated immigration debate, alienating government reforms, and a shift in social structure provide the ideal platform for Tom Weise’s memoir. His fascinating life story was portrayed in the critically-acclaimed feature documentary The Good American, which premiered at the Berlin Film Festival.

Weise is a political scientist with a degree from the Free University of Berlin. He studied at the most famous political institute in Europe, the Otto-Suhr-Institute, where his teachers included a former secretary of state, a former attorney general, and a former presidential candidate. He lived in Berlin and Sydney, Australia, in the early ’90s and from 1994-1995 worked as an intern for The MacNeil/Lehrer NewsHour in New York City.

After four years in Paris, where he and his partner Keith were one of the first same-sex couples to legally marry, and almost two years in Barcelona, Spain, the author moved to Cusco, Peru, near Machu Picchu, where he lived a self-imposed spiritual exile in the mountains. He most recently moved to a remote beach village in Costa Rica where he works for change in discriminatory immigration laws and wonders if he’ll ever be able to legally return to the United States.

Weise has reached a worldwide community, well-known in NYC for his community work and initiatives—helping over 20 charities, comforting children with HIV, co-founding a gay homeless youth shelter, and assisting undocumented asylum seekers—as well as within the adult industry where Weise created an escort support group assisting with health care, legal issues, finances, future planning, and other serious life circumstances.

From growing up in postwar Germany, through a festering estrangement from his own abusive family, to the comprehension and denial of an HIV diagnosis, Weise led a double-life for fear that his lifestyle would conflict with his life of advocacy—his memoir opens every door, leading the way for immigration reform and LGBTQ equality and empowerment.