Okay... I can't contain my excitement! For the last year we have been working on our September release WOMEN'S GROUP which is the bookend to the author's 1977 novel. We have now signed the re-release of the first book THE CRACKER FACTORY (New York Times bestseller, turned into a made-for-TV movie)!
We have retitled the new September book THE CRACKER FACTORY 2: Welcome to Women's Group and designed the two as a very cool collector's set... 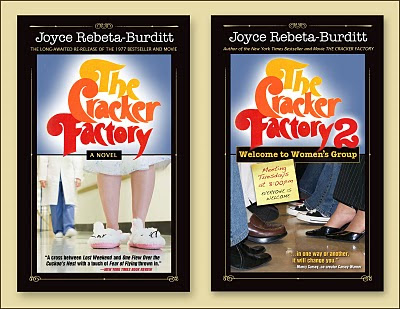 THE CRACKER FACTORY 1977 RE-RELEASE
The New York Times called it "A cross between 'Lost Weekend' and "One Flew Over the Cuckoo's Nest'… with a touch of 'Fear of Flying' thrown in."
Chicago Tribune reviewed, "Picture TV's Rhoda with a drinking problem, put her into a female version of 'One Flew Over the Cuckoo's Nest', and you have 'The Cracker Factory' in a barrel."
Los Angeles Times wrote, "A frankly autobiographical and hilarious novel … Comparisons are bound to be made with 'One Flew Over the Cuckoo's Nest' but I found Rebeta-Burditt's book much more effective than Kesey's because its insights are not those of an interested spectator but of a walking wounded, a hurting actor in the hospital's ongoing drama… A novel that will shake you, delight you and lift you high, as only fine writing can."
THE CRACKER FACTORY 2: Welcome to Women's Group (2010)

Reviewed by Marcy Carsey, Co-creator of Carsey-Warner, producers of The Cosby Show, Roseanne, Grace Under Fire, A Different World, Cybill, Third Rock from the Sun, Grounded for Life, and That 70s Show:
“Joyce Rebeta-Burditt has written a wonderful gift of a book that reaches out and grabs you by the heart. It’s like a deeply felt conversation with the best friend you ever had. If you’re an alcoholic, or if you love one, or if you’re any sort of living, breathing, feeling human being, let this book into your life... in one way or another, it will change you.”
Stay tuned for more big news on these titles…!
Posted by Nancy Cleary at 7:08 AM