I heard Martha Stewart the other day say her company had 36,000 SKUs (or products). Proportionally... I was so thrilled to see Wyatt-MacKenzie has 186 titles listed on Amazon! This is a combination of books, ebooks, and audios. Blows my mind. I remember when there were 4. And, I'm even prouder of the fact that the authors of all of these books had a great experience with Wyatt-MacKenzie.
This is a website where you can search for authors or publishers and view their list (on the day I checked it was counting ebooks and audios separately, it usually puts alternative editions under the paperback!): http://www.salesrankexpress.com. Our first page.... 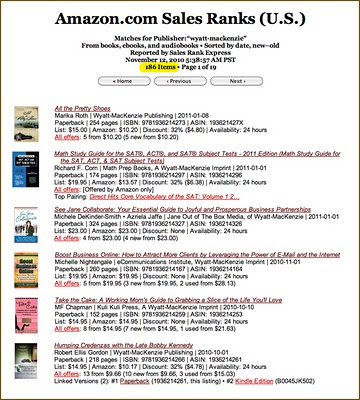 Labels: From the Publisher's Desk

How To Get Your Book Into Bookstores - NOT!

I love Penny Sansevieri, she endorsed my book years ago and contributed to an author promotion CD Wyatt-MacKenzie produced. But, I just listened to this show "Getting Your Book into Bookstores":
http://www.blogtalkradio.com/thepublishinginsiders/2010/11/17/getting-your-book-into-bookstores
As an indie publisher -- this show MAKES MY HEAD EXPLODE!!!
I just wish the focus was: any store BESIDES a bookstore is good for your book!  An important point should be made too -- the guest, Elaine Wilke's book "Nature's Secret Messages," is a very relevant “green” topic, which in itself is “evergreen” (a book that keeps selling) and, it looks gorgeous.
Here are my thoughts on the show... forgive me if I sound bitter, I'm usually a very positive person. If I had listened to this 13 years ago I would have believed it, but having the experience of looking back over a decade from the other side of the desk, and how the numbers REALLY pan out... well, it makes me a bit bitter. =)
Calls to the publisher (me) saying, "My book isn't in such-n-such bookstore," drive me NUTS. Do authors realize how many books it would take to "blanket" ALL of the bookstores, and what it would take to move bodies into those bookstores to buy the book in the short time it will stay there? Years ago, when we were with a major distributor, we "pushed" 15,000 books out (ordered 6 months ahead by our distributor’s book buyers because of our great publicity plan) and that was a SMALL push. We even paid B&N $1500 for “end-of-rack displays” in 110 stores (just a few). I still got emails from the author that relatives in some town “couldn't find the book anywhere.” With a “successful sell through” and major media we still had 70% returns, leaving us in the red over -$35,000. WHY WOULD YOU WANT YOUR BOOK “IN” BOOKSTORES!? Without major publicity and droves of people looking for it, they will be returned if not sold in 2 short months.
So, so many authors don't realize bookstores work on consignment, at a huge cost and detriment to the publisher. When I hear someone say, “They (a buyer, distributor, or store chain) ordered 3000 books!” -- that does not mean they have sold. That means they are in limbo. Publishers pay to print the books at the printer at one location, pay to ship them to the distributor, they send out to the bookstores, in 2 months the bookstores then ship returns back to the distributor, then the distributor will often ship backlisted titles back to the publisher. All of that waste, leaving a huge carbon footprint, and at a major cost to only the publisher. There is NO risk to the store or the distributor -- distributors take their commission on books they push to the stores but they do not give back their 15% when those books are returned.
Imagine this scenario when contacting a “list of bookstores”...  So, you’ve called all the stores in the area and told them you’re getting publicity and you’ll mention their store on air. Ten stores agree to order 6 copies each. You’re on local TV, 50 or so people jump on Amazon and buy (Yea!). A few dozen buy it at a bookstore (Woohoo!). Three months later (or sooner) those at the stores that did not sell come trickling back in. You are now at negative 40 books returned (plus return shipping costs) and 50 books sold online -- so you are at ZERO for all of your efforts and your successful TV appearance. If you want to up this equation to national TV and a national bookstore push, see the example in the second paragraph above.
A few other notes: An autographed book does not stay in a store any longer, and in fact, is considered “damaged” when returned and is destroyed. This broke my heart when I realized an author we had touring Texas grocery stores, where they order 6000 books, and she signed as many as she could. We never saw those books again, on our statement from the distributor next to the huge negative number it read "HURT" (their term for damaged). And, on the subject of “reorders” -- bookstores often reorder after they have returned what did not sell the previous quarter. Yes, you read that right. An on-going cycle of the same book being returned and reordered, doesn't make much sense does it? But, so they do not have to pay for what has not sold, stores can avoid the bill by returning and then reordering thus giving the store 90 more days, and so on, and so on, for a well-promoted book all year. Over the months, returns negate the sales and shipping adds to the negative distributor statement.
My advice to authors: Spend your time selling to the actual end customers! Bookstores are great for visibility, but unless the book is very special (like Elaine’s) your efforts to get into bookstores should be viewed as a promotion cost. Major publishing houses work hand-in-hand with bookstores and the media in a very precarious balance that involves hundreds of thousands of books and advertising dollars.
Bottomline: have your book with Ingram’s LightningSource for international distribution online and to bookstores if you make it Returnable and at a 55% Wholesale Discount . The returns in this “reactive” model are not as bad as pushing into stores proactively. Energy spent pursuing bookstores is a tragic waste; re-route that time and pre-returned copies into review copies, because that's what the returns will end up as! Here are the returns we got yesterday (timed so well with the radio show). Not so bad, 64 copies of a dozen different titles, about a $500 loss (ouch!). 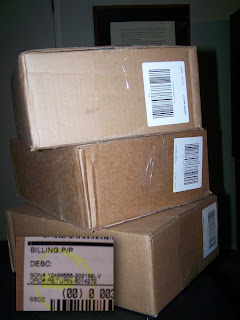 ANY other stores besides bookstores though is brilliant, and I bet Elaine’s product (http://www.getyourbookintostores.com) has some great tips on that!
Posted by Nancy Cleary at 9:32 AM

Labels: From the Publisher's Desk

I'm jumping out of my Uggs excited. We just licensed a Monet for the cover of a Spring 2011 book! It was the author's fantasy to use Monet's La Japonaise... and... we were just granted the license from The Museum of Fine Arts in Boston. Here's my cover sketch... 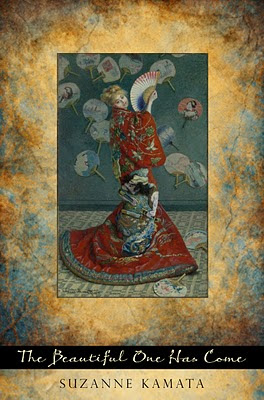 The Beautiful One Has Come: Stories by Suzanne Kamata (Wyatt-MacKenzie, June 2011) is a collection of twelve stories about expatriates in Japan, Cuba, France and Australia. Stories from this collection have been previously published in literary journals and magazines such as Calyx, Kyoto Journal, Crab Orchard Review and Wingspan (All Nippon Airway's inflight magazine). The autobiographical story "You're So Lucky” was nominated for a Pushcart Prize and “Polishing the Halo” about an expatriate mother in Japan who discovers that her daughter is deaf, was a prize-winner in the ANA/Wingspan Fiction Contest. Another story in this collection, “Driving,” was selected by renowned poet/playwright/novelist Nzotake Shange for inclusion in The Beacon Best anthology. An earlier combination of Suzanne's stories was runner-up for the Tupelo Book Prize, and a semi-finalist for the Iowa Fiction Prize.

Suzanne Kamata is an expat living in Japan. She's the author of the novel Losing Kei and editor of the anthologies Love You to Pieces: Creative Writers on Raising a Child with Special Needs, The Broken Bridge: Fiction from Expatriates in Literary Japan and the award-winning Call Me Okaasan: Adventures in Multicultural Mothering (Wyatt-MacKenzie, 2009). Suzanne has been nominated for the Pushcart Prize five times, and she is a two-time prize winner in the All Nippon Airways/Wingspan Fiction contest.

Want to be inspired? Watch these videos of the opening night speakers, the "Smart Women of the Year" Award Winners, on Sheri's facebook:

* * *
Sheri and Wyatt-MacKenzie have partnered to offer her network the smartest way to publish:   http://www.sherimcconnell.com/publishimprint/
* * *
Thrilled to see Amilya Antonetti there. I just LOVED her presentation on opening night. Here she is promoting The Broken Cookie Syndrome which Wyatt-MacKenzie produced for her a few years back!