We just took a family trip down to San Francisco to celebrate my birthday. It was a great getaway with lots and lots of laughs, and some plans for the future. I've always told Wyatt and MacKenzie, "You can do anything you are interested in for a career. Whatever you love to do." I continue to gently nudge them toward their talent and show them ways they can use it within the company I have built (for them!).

My challenge to them this week was for one small step forward...think about the logos for their own divisions of Wyatt-MacKenzie. So...


MacKenzie Media
Kenzie has been playing with video editing and sound composition. She helped me create this book trailer for one of our authors, and now she has adjusted the soundtrack and added a first draft of her logo to the end!

Wyatt and his dad have been building a Motorsports Division for a few years, racing our Rock Crawler called "The Timber Chicken." Here it is in Wyatt's first draft of his logo -- that's his dad scaling a culvert in a race they took second place. 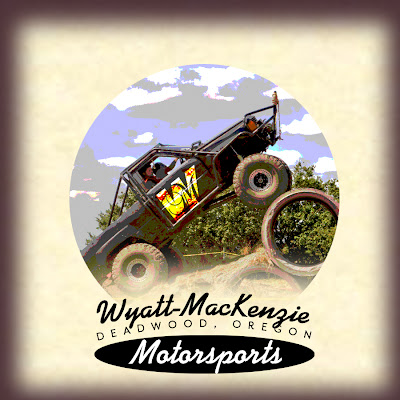 We're excited to grow our Media Division and Motorsports Division over the next few years. We have a little high-tech, to keep up with the multi-media virtual-reality experience books are headed in, and a little redneck to not lose touch with real-world steel-rubbing adrenalin-pumping fun. That's Wyatt-MacKenzie, Deadwood, Oregon!
Video customers can contact media@wyattmackenzie.com and Racing Sponsors can contact motorsports@wyattmackenzie.com for more information!
* * *
For a laugh...here's video from our trip. A little company team-building in action. (Music by Colt Ford. Segways rented from Segways SF Bay -- ask for Charlie.)
Posted by Nancy Cleary at 6:00 AM